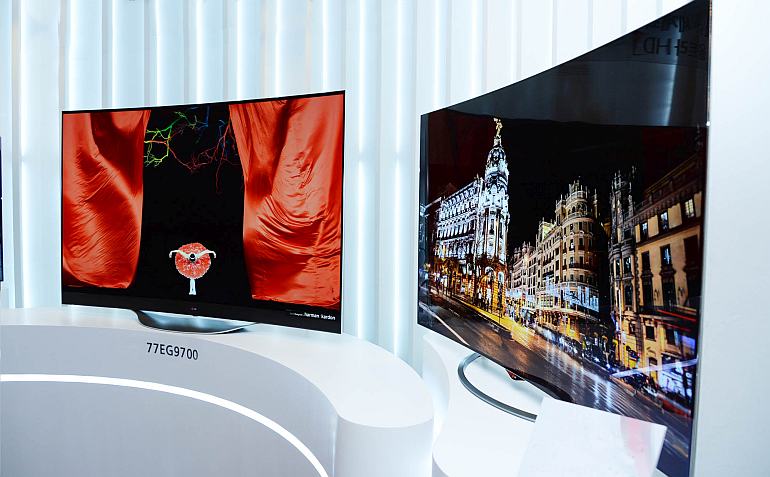 These are the first 4K OLEDs available for sale, and that’s actually pretty big news.

OLED is a new television technology, one that offers significant picture quality improvements over LCD and even plasma. When I reviewed the Samsung OLED, it was about the best looking television I’d ever reviewed.

LG’s OLEDs use “WRGB,” instead of the traditional individual red, green, and blue sub-pixels. WRGB is a sandwich of different color OLEDs that create a “white” sub-pixel, which then uses color filters to create the red, green, and blue you see. If this sounds odd, using colors to create white and then filters to go back to color, LG has claimed it is easier to manufacture, has longevity benefits, and other positives. There’s also a white sub-pixel to help boost brightness, which rarely hurts.

Earlier this month LG announced pricing on the 55-inch, 1080p 55EC9300, and at $3,500 it was easily the cheapest big-screen OLED ever. That in itself was exciting. the 55EC9300 won Value Electronics’ multi-TV shootout this month as well.

These two new models are, perhaps, even more important. But perhaps not for the reasons you’re thinking.

Why it’s a big deal

Unlike LED LCD, when you make the pixels smaller on an OLED they emit less light. The same is true for plasma, which is one of the reasons why plasmas have all but disappeared. There have been concerns that getting OLED to 4K is one of the major holdups with the technology.

It seems that by using WRGB LG has gotten both the price down (with the 55EC9300) and the resolution up (with these two). Awesome.

“LG 4K OLED TV is the pinnacle of technological achievement and a new paradigm that will change the dynamics of the next generation TV market. As the next evolutionary step in display technology, OLED will play a major role in reshaping our industry. I feel confident when I say that 4K OLED is a bona fide game changer.” – Hyun-hwoi Ha, president and CEO of LG’s Home Entertainment Company.

I have been a long time lover of OLED technology, so I’m ecstatic to see new and more models come to market. I can’t wait to check out these new LG OLEDs. Hopefully other companies will soon follow suit. The more the better because OLED is so, so, so much better than LCD.

Outdoor TVs are Getting Serious